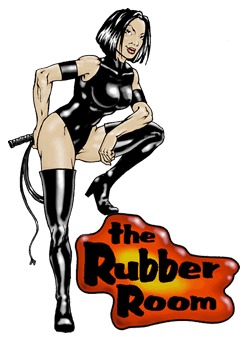 Shop time is 12 weeks. Hopefully y'all have backup pairs!

Story and photos by Bruce Willey

Years ago, when I was a young, naive lad, I brought a pair old Boreal rock shoes to be resoled at the Rubber Room in Bishop. The resoling shop’s logo—a cartoonish scantily clad, rubber-wearing dominatrix found in climbing magazines—shared a certain salacious fervor more likely to be found in the back of a big-city weekly where the term “massage” is thrown around rather loosely. So with this image planted firmly in mind with the spike of a six-inch heel, I hesitated at the door half expecting to be whipped and spanked. And I would have deserved it given the sorry state of my worn shoes.

I placed the shoes on the counter, Tony picked them up and looked at the soles while I signed my name and address, then told me the shoes would be ready in about two weeks. They were and my shoes felt and climbed better than the day I bought them. I’ve been going back ever since.

Tucked behind a beauty shop, a bar, and across from a local grocery store in downtown Bishop, the Rubber Room has been recycling worn-out climbing shoes and making them new again for 10 years in its current location and nearly 30 years altogether. And lest the sexy advertising ploy be lost in the semantics of feminism, or rock climbing for that matter, let it be known it was conjured up by a woman; none other than Nan, Tony Puppo’s wife. Betty Page was the inspiration and her image still hangs—whip in hand—in homage to the shop’s motto: …where discipline, training, and integrity fill all your rock shoe resole needs.

After countless resoles on my granite and sandstone scrappers, done up to perfection by the Rubber Room, I decided to go to the source of all that good rubber in search of its soul—without putting to fine a point on it.

It should not come as a surprise that the Rubber Room faces straight up to the Sierra Crest (Mt. Tom, Basin Mountain, Mt. Humphreys) and the Buttermilk country, scene after scene of so much lost rubber. And secondly the place smells like a rubber plantation. Tacked to the wall are climbing pictures, faded by the Sierra light that streams in the door most afternoons, and several trees of shoes in various stages of repair make for a small forest amongst shoe horns, sanders, and other industrial cobbler machinery. NPR News plays on the radio. So much for the dominatrix image.

Simon Vickers, sporting a handlebar mustache and close-cropped hair, sits at the computer taking care of the in-and-out box. About 50 percent of the shoes come from California. The rest come from elsewhere in the U.S. and beyond. The Rubber Room has received shoes from as far away as Australia, South Africa, even Israel. In the last decade they have resoled as many as 25,000 pairs, averaging a little less than 300 pairs a month.

Master cobbler and Rubber Room owner Tony Puppo is working on a shoe, the old sole ground away to make for the new. He trims around the edges of fresh rubber with a pair of scissors, then bangs on the rand with a hammer. Wearing a white untucked shirt, jeans, and sandals, he’s as unpretentious a man as they come with a quick smile and an easy laugh. As he works I ask him about the history of the Rubber Room.

The Coefficient of Friction

Puppo came to Bishop in 1976 for the climbing and skiing. For a year he flipped eggs, falling in with the small climbing scene at the time including Rick Wheeler, James Wilson, and Bob Harrington. Bishop wasn’t the climbing Mecca it is now and if you didn’t own a mule you were considered an outsider. Puppo isn’t one to spray about his achievements, but a look in any Bishop guidebook reveals many a classic climb that he authored.

Wheeler and Wilson, who had opened a climbing and backpacking store selling Patagonia seconds and sleeping bags on Main Street (now Wilson’s Eastside Sports), asked Puppo if he wanted a job. At the time they were fixing cowboy boots, women’s heels, mountaineering boots, and rock shoes. Puppo joined the team in 1981 and learned the cobbler craft pretty much by doing it under the watchful eye of his mentors, including Dan Asay who still shares the Rubber Room space with his own shoe-making business. Asay began cobbling when he was a hippie in Berkeley and now makes custom boots for those with “buggered up feet” as Tony puts it, and those who have had the misfortune of losing their toes—one man, his whole foot—to frostbite.

Puppo hired Nan who later turned out to be his wife and the couple bought out the business from Wilson. In 1999 they moved to their present location. Unfortunately, Nan took a fall while bouldering, breaking her back. She is still suffering from nerve pain and no longer works behind the cobbler’s bench.

“I’ve always tried to figure out how they (the climbing shoe manufacturer) put it together without having been in the factory,” Puppo says. “Nobody has the lasts from say 5.10 or La Sportiva because they’re locked in a vault and are worth millions of dollars. They’re untouchable,” he continues. “If you get the pattern for a last and go away with it that’s certainly considered industrial espionage.”

Puppo gives me a short lesson on rock shoe anatomy, explaining that a shoe’s fit is determined by its last—think “foundation” of the shoe. “If you look at a shoe they are very complicated as far as the pieces of leather that go together to build a shoe,” he says. “And the simpler the shoe the more simply they fall apart. They also don’t hold their shape as well. Whereas the more technical shoe hold their shape and work for you because of the way they are constructed.”

As far as the best rock climbing shoe, Puppo hesitates, not willing to step on anyone’s toes, so-to-speak. But he does say, “Everyone’s top of the line model is more of a joy to work on than their price-point shoe. A beginner shoe is usually on a beginner foot who destroys it. We have a mountain of shoes with gaping wounds in the toes. Had they stopped a week before they might have been saved.”

“May I express my pet peeve about toe draggers?” Simon says from behind a large metal shelf of shoes ready for shipment to their owners. Simon hails from Santa Cruz and enjoys working with his hands. Prior to his gig as a cobbler he used to work for Rock Lobster, building bike frames.

“I just wish people knew what the rand is. Take care of your rand ‘cause your rand is what supports your climbing edge. There’s no integrity to the shoe once you’ve wrecked your rand.”

“It’s like coming into a auto repair shop with a flat tire and saying, ‘My car doesn’t run anymore. Can you fix it?’” adds Puppo. “People don’t do that to their cars but they do it to their shoes.”

With this kind of talk, I sense the cobblers may soon be getting out their whips and donning rubber suits. And since they have just resoled a pair of my shoes, a pair that I continued climbing on past the sole and into the rand, I think it best to go. Best to go out on the granite and feel the beautiful friction of new soles, of rubber meeting rock. To sense the discipline, the training, the integrity. And because of all this, I’ll no doubt be back.

This website uses cookies to improve your experience while you navigate through the website. Out of these cookies, the cookies that are categorized as necessary are stored on your browser as they are essential for the working of basic functionalities of the website. We also use third-party cookies that help us analyze and understand how you use this website. These cookies will be stored in your browser only with your consent. You also have the option to opt-out of these cookies. But opting out of some of these cookies may have an effect on your browsing experience.
Necessary Always Enabled
Necessary cookies are absolutely essential for the website to function properly. This category only includes cookies that ensures basic functionalities and security features of the website. These cookies do not store any personal information.
Non Necessary
Any cookies that may not be particularly necessary for the website to function and is used specifically to collect user personal data via analytics, ads, other embedded contents are termed as non-necessary cookies. It is mandatory to procure user consent prior to running these cookies on your website.
Save & Accept